Words by Michelle Guy and Photography by Jeremy Phillips 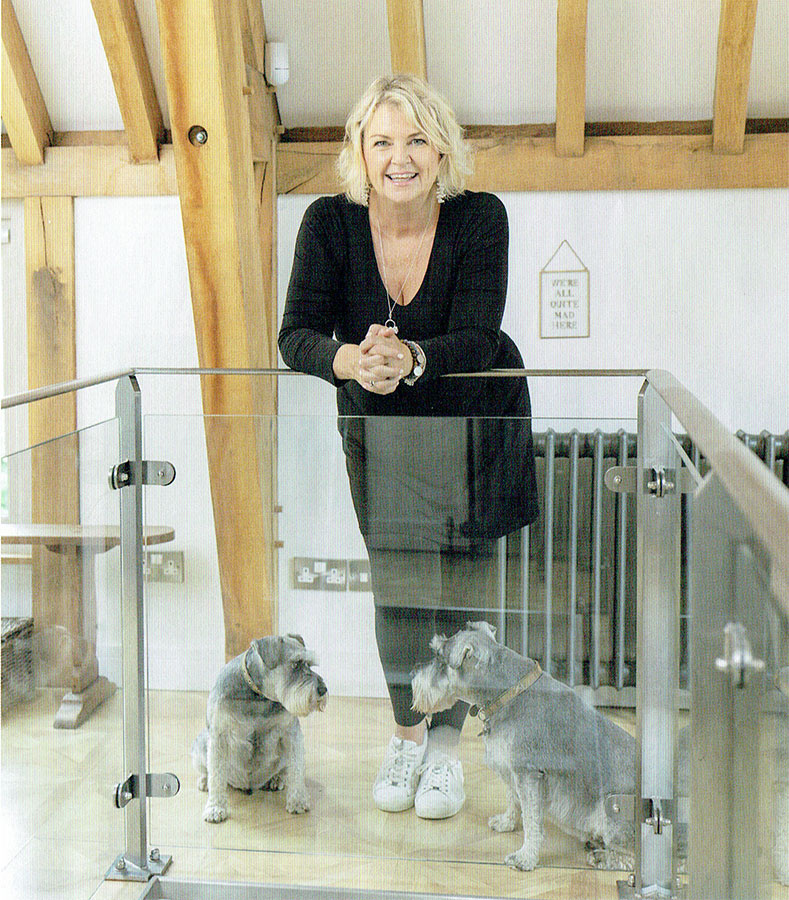 When a turn of events meant Samantha Parr had to move out of and sell her family home in a beautiful South Staffordshire village, she wanted to find a way to stay on the high street she’d grown to love over the past 20 years. Never one to shirk a challenge, Samantha had the idea of turning a redundant garage she owned at the back of the high street into a home on a plot no bigger than 140m2. “Most people I told said I’d never get planning to build on the site but I’m one of these people who see an opportunity and thinks ‘let’s go for it!’ So I blindly went ahead and put plans in anyway,” recalls Samantha.

And she was right to go ahead. The planning process was pretty straightforward. Conditions were placed only on the fabric and materials used for the building (the cladding, bricks and roof tiles) because the plot resides in a conservation area. “Because I had a strong idea of what I wanted, coupled with a really supportive planning officer who understood what I was trying to do, the plans were passed,” says Samantha. “I knew I wanted a Swiss-style chalet so I put all of my ideas together on a moodboard. I then visited Prime Oak – who normally build orangeries bigger than the size of my plot! – and they were really positive and thought it would be fine to crane in so were happy to proceed.” Once plans were passed, Samantha had a short timescale to build as she needed somewhere to live, so it was all systems go.

ALLEYWAY ACCESS
This is the 2m high opening to the quaint alleyway that is the only access point to the plot. It was a challenge for all the trades involved, but one they all dealt with superbly nonetheless. 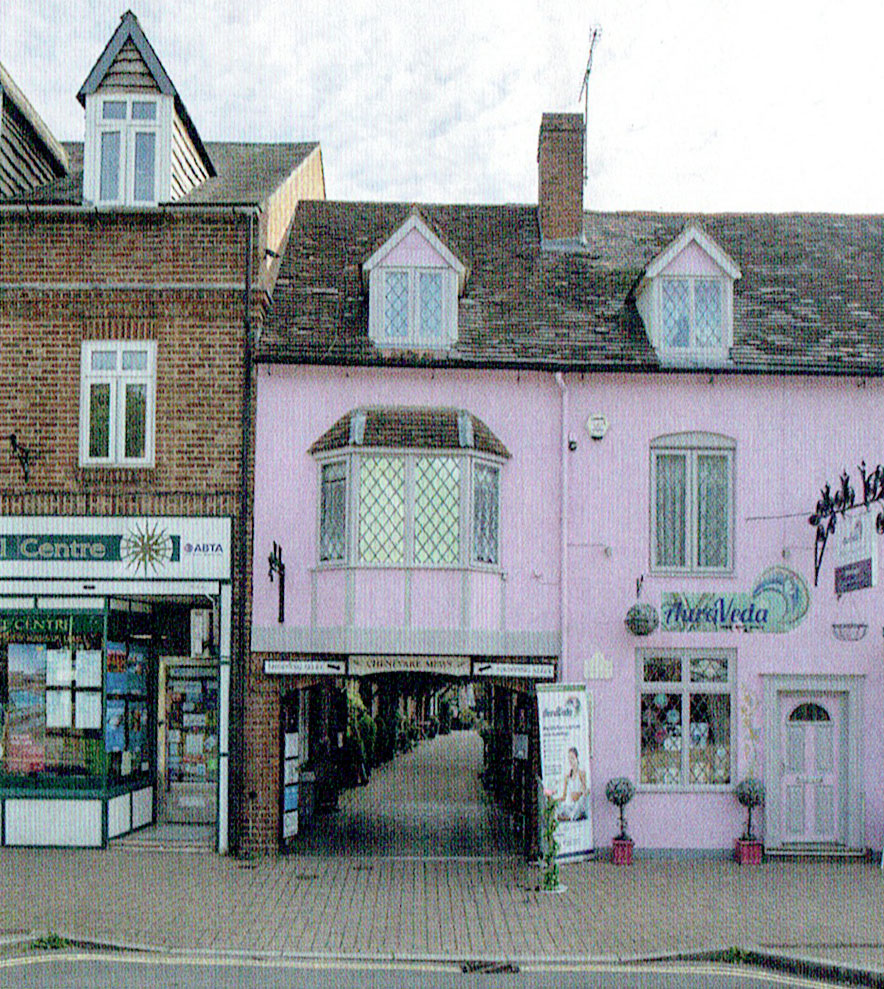 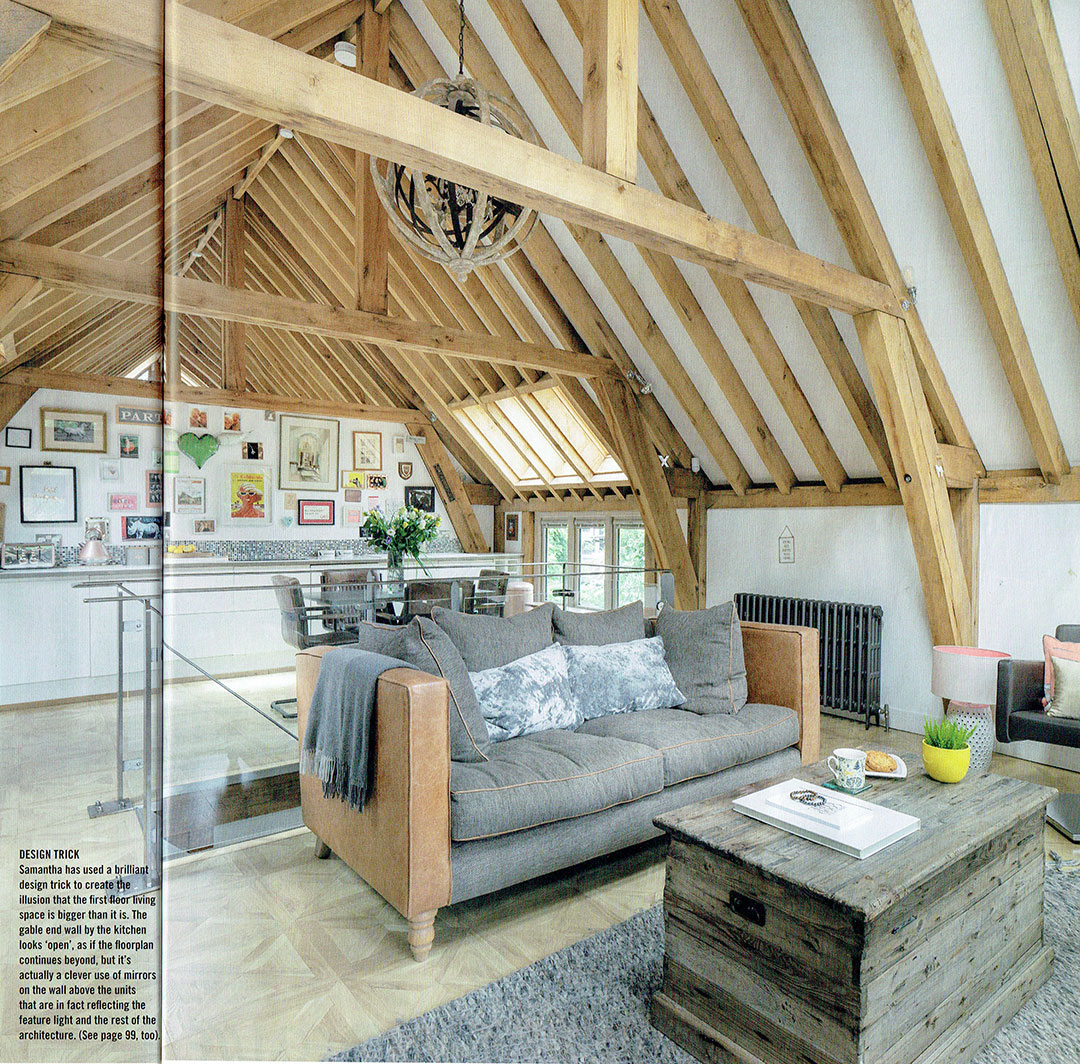 RESTRICTED ACCESS
Although planning was pretty straightforward, the site and access to it was another matter entirely. The plot was nestled down the back of a narrow, quaint cobbled alleyway, which was flanked on either side by independent cafés and shops. To further complicate matters, the entrance arch leading into this alleyway had a 2m-height restriction. When the oak frame company saw the all of this for the first time, they quickly realised they wouldn’t be able to crane the frame in, so they had to drag the oak through on a hand-held roller! “It was definitely back to basics, literally moving the frame piece by piece,” says Samantha.

And this restrictive access also affected all the trades on site. The builder who did the groundworks had to excavate 50 tonnes of soil from the plot; the services — gas, water and electricity — all had to come in off the high street, which had to be dug up three times. “Getting the gas connected was a massive job. I tried to get shared access [for the services] but I couldn’t, so the street and alleyway were dug up.” The lay of the land also meant that a pump had to be installed to get water up to the property. “It was a real challenge,” recalls Samantha.

Having neighbours en route to the building site was another huge consideration for Samantha and her team. “The shops are shut on a Monday, so we’d take full advantage of that. The first load of any materials would arrive at around 5.30am to make sure we were there outside of the shops’ usual opening hours. One Saturday morning my daughter and I moved all the blocks together by hand before the shops opened. I supplied the shop owners with cake and offered to clean their windows to apologise for all the inconvenience,” says Samantha.

On such a small plot tensions did, undoubtedly rise. “Towards the end there were around 20 people on site so it got a bit tense. But I’d use some positive energy and herd them all back together,” laughs Samantha, who took on the role of project manager. “I provided a themed breakfast every Friday for the trades on site, to rally some team spirit, and we all ploughed on as a dynamic team.”

Samantha’s team consisted of local skilled trades, including an 80-year-old local bricky, called Dickie, who Samantha brought out of retirement having met him in a chance encounter while walking her dogs. “Dickie was telling me about how back in the day you hired a clerk of work to oversee all the work on site so I employed him as my clerk of work,” recalls Samantha. “Fit as a fiddle he was. The only digger small enough to get through the alleyway was a digger used for digging graves that Dickie drove. He brought years and years of experience to site. The guys loved him, and all of his stories!” The rest of the subcontractors included oak framers, roofers, electricians, gas fitters and plumbers.

DESIGN TRICK
Samantha has used a brilliant design trick to create, the illusion that the first floor livingspace is bigger than it is. The gable end wall by the kitchen looks ‘open’, as if the floorplan continues beyond, but it’s actually a clever use of mirrors on the wall above the units that are in fact reflecting the feature light and the rest of the architecture. 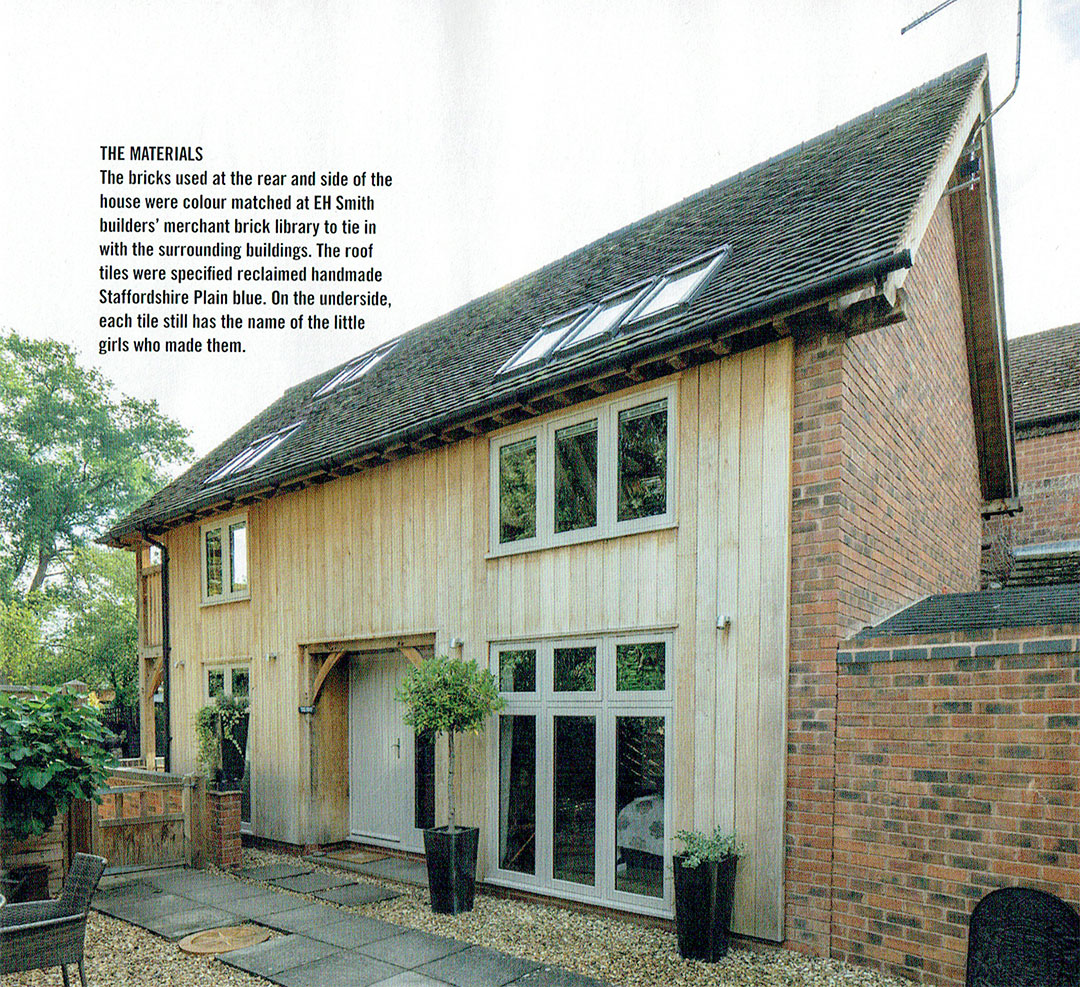 THE MATERIALS
The bricks used at the rear and side of the house were colour matched at EH Smith builders’ merchant brick library to tie in with the surrounding buildings. The roof tiles were specified reclaimed handmade Staffordshire Plain blue. On the underside, each tile still has the name of the little girls who made them. 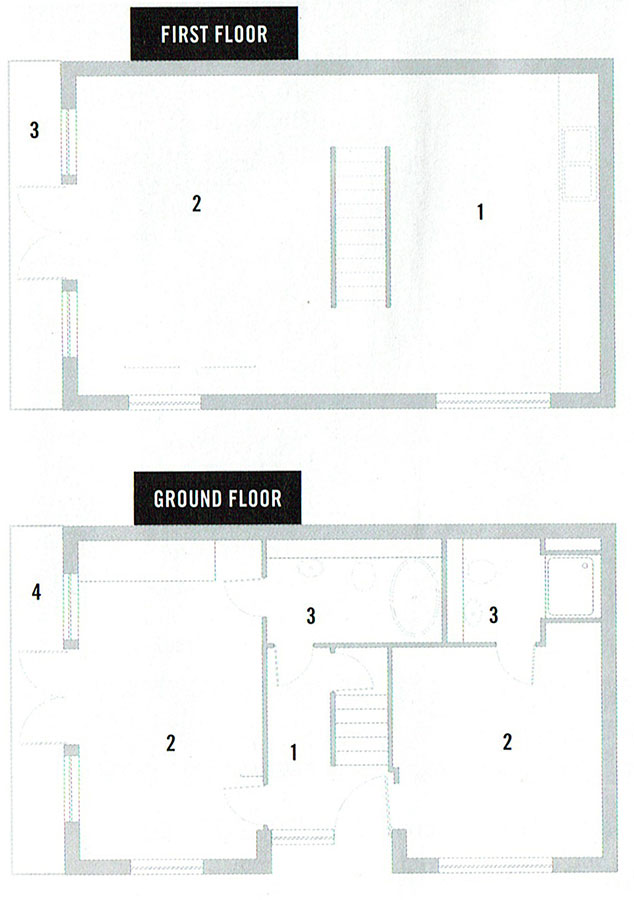 THE FLOORPLAN
The house features an upside-down layout, with the two bedrooms and bathrooms on the ground floor. A staircase in the middle of the floorplan brings you up into the open-plan kitchen and living area, with glazed gable and balcony at one end.

DESIGN TRICK
Samantha has used a brilliant design trick to create, the illusion that the first floor livingspace is bigger than it is. The gable end wall by the kitchen looks ‘open’, as if the floorplan continues beyond, but it’s actually a clever use of mirrors on the wall above the units that are in fact reflecting the feature light and the rest of the architecture.

MAKING A SMALL HOME FEEL BIGGER
Samantha and her team of skilled trades built the house in just 15 weeks, which is quite an extraordinary feat given the plot restrictions and having never self-built before.

The result is a beautifully formed oak frame home. It’s an upside-down house with two bedrooms and bathrooms located on the ground floor and a first floor that boasts a wonderful open-plan kitchen and living area with a glazed gable and small balcony. Jack and Jill doors mean one of the ground floor bathrooms functions as both an ensuite and a bathroom for visitors. The warmth of the oak beams throughout the house is so homely yet the high ceiling gives the room a sense of loftiness and airiness, which makes the space feel bigger than it is.

Samantha’s eye for interior design, and buying reclaimed where she can, is expressed in her home with reclaimed doors and lights hung throughout, all adding charm and character to the rooms. So what does Samantha think about her aptly named home, Little Lodge? “The floorplan is small on paper but I just use all the space. It’s quiet, private, safe and peaceful. And the location is just great — on a beautiful high street, with views out that change with the seasons. I can’t see myself moving anytime soon.” 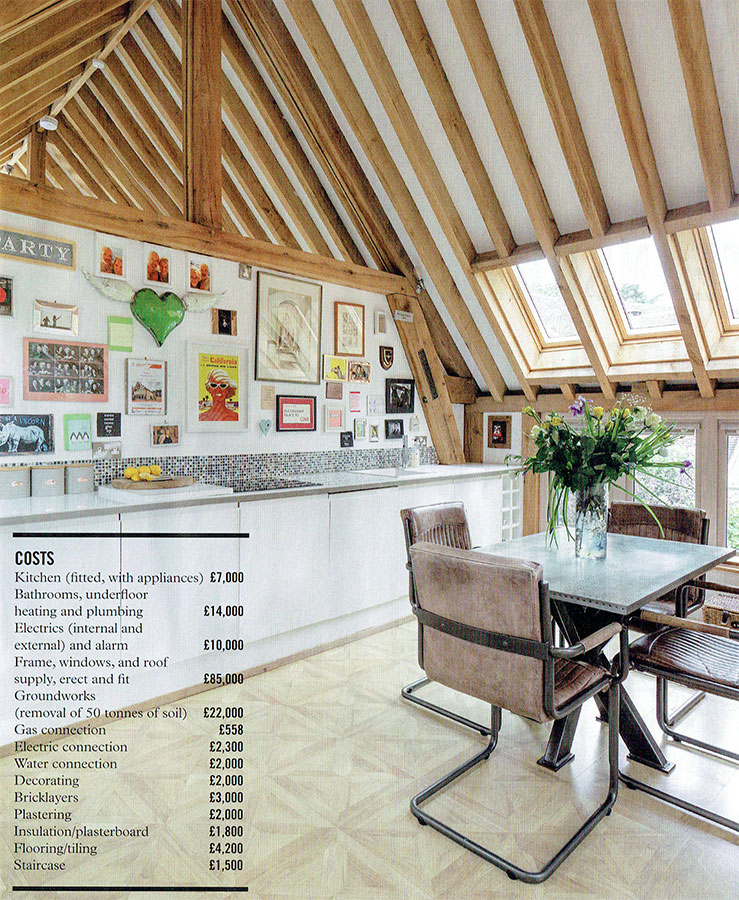 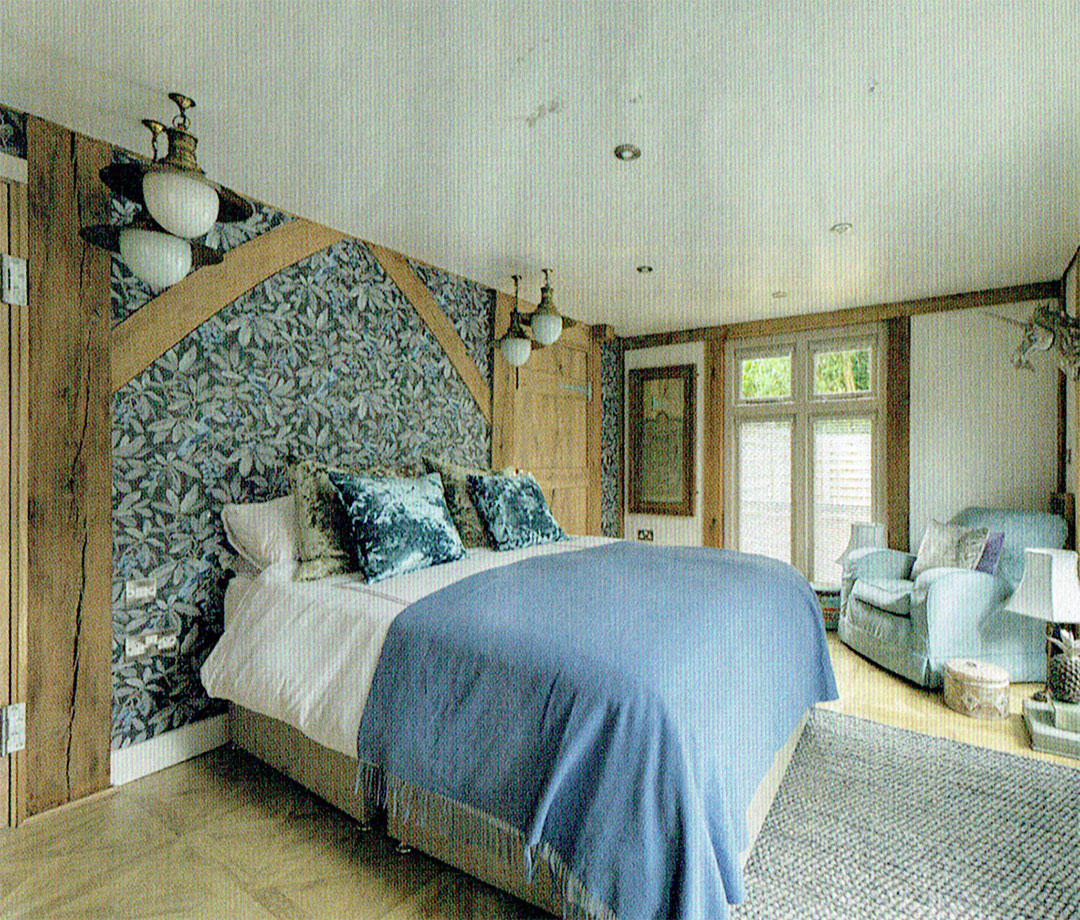 BUDGET BUY
Another chance encounter on a dog walk led to Samantha meeting someone who supplied industrial staircases. Samantha new they’d have something she could buy from them that would fit her budget, and this is the result. It cost £1,500. 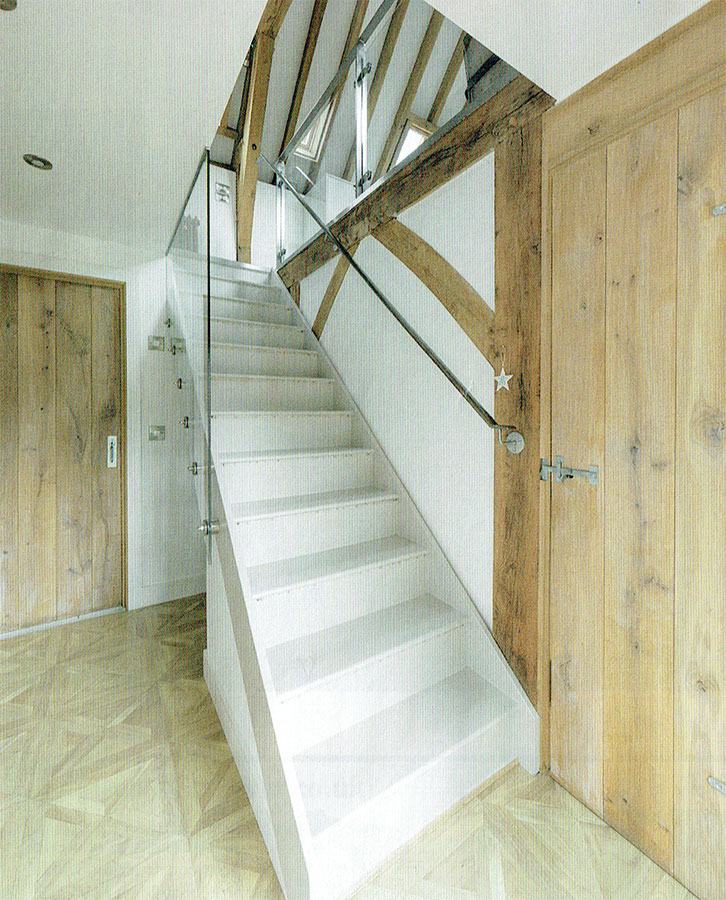 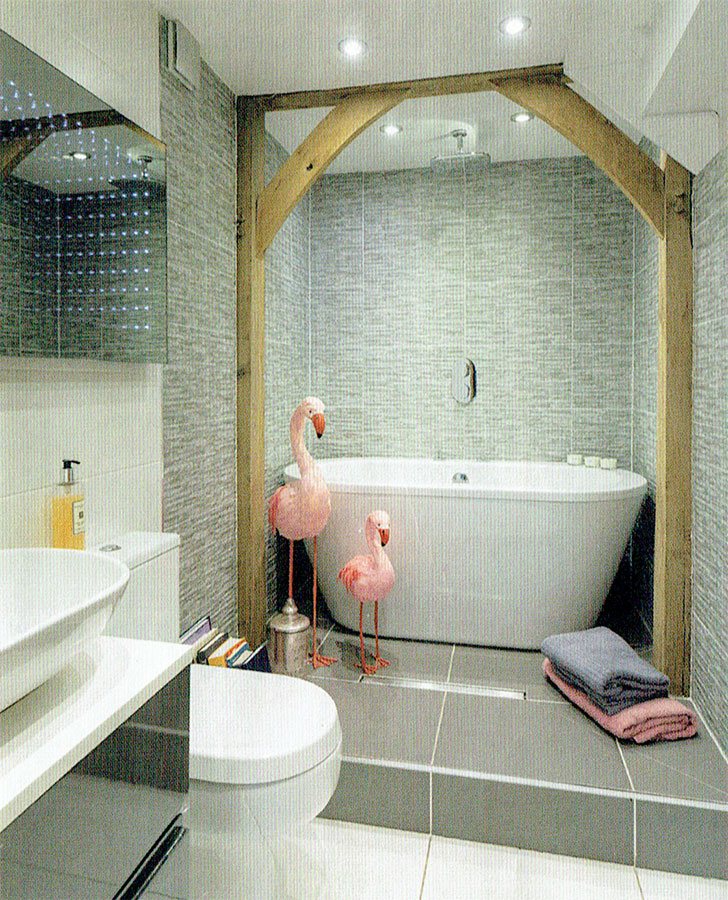 ARCHITECTURAL FEATURES
Throughout the house the oak frame is given centre stage. In both bedrooms and bathrooms, for example, the frame has been used to add architectural merit to the design aesthetic. The beams in the bedroom suggest a ‘headboard’ and in the en suite, a nook for the bath to reside in. 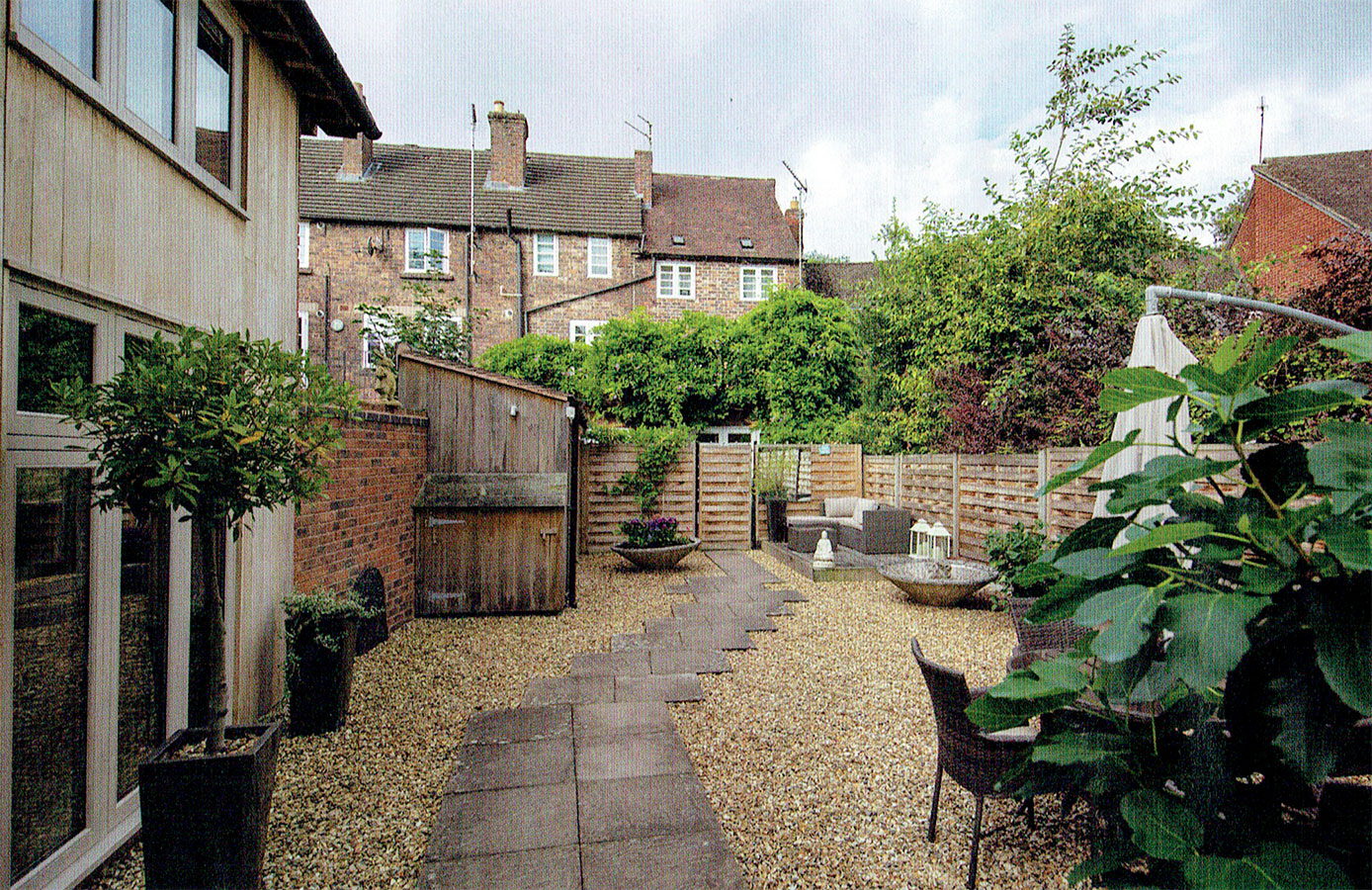 THE BUILD
A concrete slab was chosen as the floor construction, with a vapour control layer (VCL) poured underneath. On top of the concrete slab there’s a 100mm layer of polyurethane board floor insulation and a 75mm thick screed.

The oak frame went up pretty quickly in three weeks, with a four-person strong team erecting the frame. The inner leaf is built from insulated timber frame infill panels. From outside in the thermal envelope consists of vertical oak cladding boards, fixed to vertical battens on a breathable sarking membrane on OSB sheathing, which is fixed to the stud wall. A 30mm cavity was provided by timber stop battens. A 7()mm Kingspan Kooltherm k12 framing board was used between the studs and overdrawn with 32.5mm Kingspan Kooltherm K 18 insulated plasterboard. This construction was chosen to provide a U value of 0.25 W/m2K. 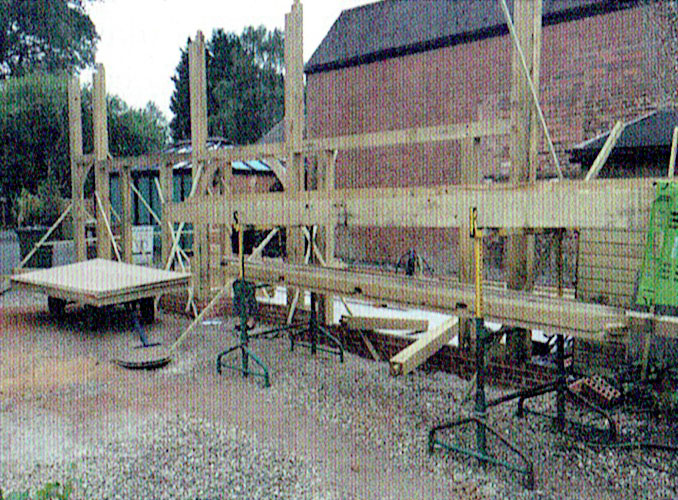 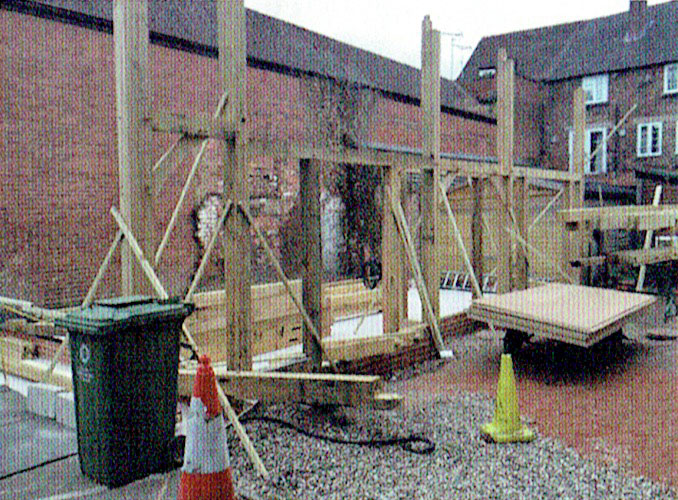 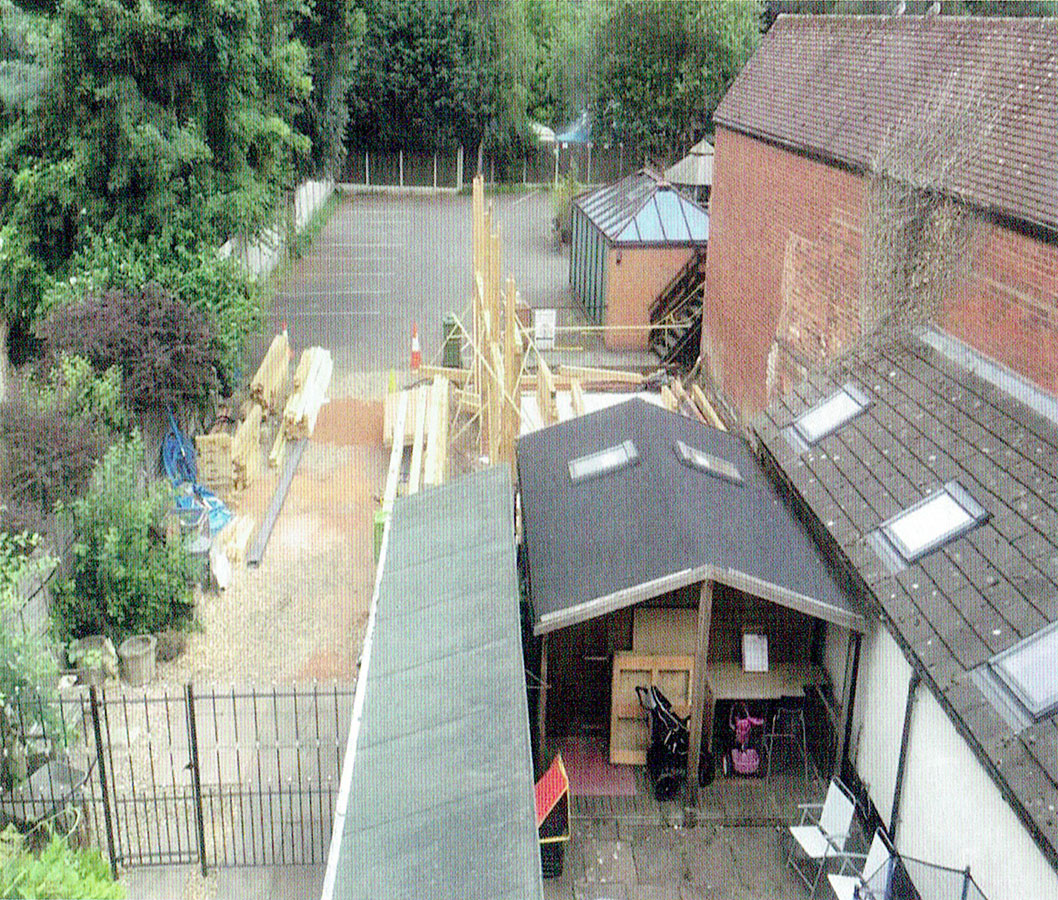